Links to the Blackboard sections for your fall courses should become visible to you starting on Wednesday 8/22. Please bear in mind that what you see on 8/22 will in most cases look like a theater several hours before a play begins. Things are still being setup, some people haven’t even arrived yet, and everything is still very much in the works. Some Blackboard sections might have no information loaded into them yet, and might remain that way for some time leading up to the semester-start on Wednesday 9/5. In such cases please keep in mind that your professors aren’t actually under teaching contract until 9/1, and are still on leave and pursuing their own research and scholarship. Everything will be sorted and ready for the start of the school year on 9/5, at the very latest.

Side note: all students taking the 599 thesis tutorial this fall should by now see their 599 section listed in their fall schedules. If you do not, let me know at cloots@mercy.edu.

This course is based on the conception of the epic as an encyclopedic narrative of substantial length featuring a central figure who reflects the values of a particular culture. It will proceed chronologically, studying the taxonomy and transformations of the epic, from its earliest Classical manifestations, through its emergence in Medieval and Renaissance texts, to its incorporation after the Renaissance into modern writing. 3 credits. Fulfills the Writing & Literary Forms field requirement or an elective.

Samuel Shepard Rogers III (November 5, 1943 – July 27, 2017), known professionally as Sam Shepard, was an American actor, playwright, author, screenwriter, and director whose body of work spanned half a century. He won 10 Obie Awards for writing and directing, the most given to any writer or director. He wrote 44 plays as well as several books of short stories, essays, and memoirs. Shepard received the Pulitzer Prize for Drama in 1979 for his play Buried Child. He was nominated for an Academy Award for Best Supporting Actor for his portrayal of pilot Chuck Yeager in The Right Stuff (1983). Shepard received the PEN/Laura Pels International Foundation for Theater Award as a master American dramatist in 2009. New York magazine described him as “the greatest American playwright of his generation.” Shepard’s plays are chiefly known for their bleak, poetic, often surrealist elements, black humor, and rootless characters, such as cowboys and rock stars, living on the outskirts of American society. This semester, in light of Shepard’s recent passing, we will experience and study a selection of his works and consider his lifetime of artistic achievement. 3 credits. Fulfills an elective by default, but can be made to meet the Literature Group 2 field requirement for students approaching graduation who still need that field requirement met.

This course will focus on humanism and the concepts arising from it in relation to the production and appreciation of literature during the Renaissance. The revival of interest in the arts and ideas of Greco-Roman antiquity and the dependence of Renaissance thought on classical themes will be among the issues discussed. Readings could include (but aren’t limited to) works by Shakespeare, Marlowe, Machiavelli, More, Spenser, among others. 3 credits. Fulfills a Literature Group 1 field requirement or an elective.

This course will examine one of the most famous, famously difficult, famously banned, and (arguably) profound modern novels of the twentieth century: James Joyce’s Ulysses. Much like Tolstoy’s War and Peace and Pynchon’s Gravity’s Rainbow, Joyce’s 1922 modernist masterpiece occupies a rare position of being a work almost universally lauded for its achievement and significance (for those who like lists, the academically-sound Modern Library calls it the greatest novel of the twentieth century) and yet one which for a variety of reasons most people haven’t read. In this class we will experience together the entirety of the work, first word to last. We will throughout the semester journey through Ulysses until, come the end of the semester, we find ourselves standing together at the absolutely brilliant end of this modern epic tale. While reading and exploring Ulysses we will as well discuss some of the people, culture, history, and events surrounding the creation of, publication of, and outrageous reception to the novel. 3 credits. Fulfills a Literature Group 1 field requirement or an elective.

This course will study classic works of African-American literature in light of Toni Morrison’s statement that “my parallel is always the music because all of the strategies of the art are there.” The course will involve considerations of how in Richard Powell’s words the blues provides “much contemporary literature, theater, dance, and visual arts with the necessary element for defining these various art forms as intrinsically African-American.” Informed by the concept that music is the trope that best illuminates contemporary African American writing, the course will study selections that could include, but are not limited to, Jean Toomer Cane, Zora Neale Hurston Spunk, James Baldwin Go Tell It on the Mountain, Ralph Ellison Invisible Man, Langston Hughes Ask Your Mama: 12 Moods for Jazz, John Wideman My Brother’s Keeper, Toni Morrison Jazz, August Wilson Joe Turner’s Come and Gone, and Maya Angelou Selected Poetry. 3 credits. Fulfills a Literature Group 2 field requirement or an elective.

This course will examine writings about working women from the post-Civil War era to the present. We will review key changes in the American work force, and social, economic, and racial factors since 1865, with attention to movements leading up to changes in the second half of the 19th century. In this multi-genre course, we will read literature (fiction, short stories, poetry, memoirs, biographies, and essays) to help us deconstruct the definitions of “women,” “working,” and “The United States” from the Civil War era to present writings about the millennial generation. We will inquire into the shifting definitions of the term “gender.” We will start with gender as a concept, a social construction reflecting differentials of power and opportunity, breaking what the feminist writer Tillie Olsen calls the “habits of a lifetime.” An important goal of the course is for students to know the literature, history, and benchmarks of major events in the lives of women. 3 credits. Fulfills a Literature Group 2 field requirement or an elective.

This is just a quick FYI to all current and prospective students who might be reading the blog, and hopefully just repeats information which is already well known, but to be completely clear: students can complete all aspects of the MA degree through our MA English program remotely, meaning through distance learning, meaning online, meaning how current students are doing it already, meaning from wherever it is you are located in the world. This includes the coursework, the comp exam, the final thesis paper: everything. No one will ever need to travel to Mercy’s physical campus in NY, or to any testing center, in order to complete any of the degree requirements or to receive the actual degree. Some grad students do voluntarily travel to our physical campus at various times for various reasons (to attend the spring symposium, to talk with profs, if they happen to be in the area, etc.) but this is not required for the degree.

I’m posting this note because it’s been brought to my attention that Mercy College periodically sends out some sort of generic form-letter to all graduate students taking online coursework informing them that they might need to travel or make other arrangements to complete some degree requirements. That is not the case for the MA English degree. Again, you can complete all requirements through distance learning and will never have to travel or make special testing arrangements. We’ve got that all figured out here in the program. As always if you have any questions drop me a note at cloots@mercy.edu.

Mary Reading, a colleague of our Dr. Fritz, is chairing a panel at the 2019 NEMLA convention on the topic of: “In, Beyond, Between Bodies: Transgender Identity through Interpersonal Spaces in Visual Media.” The call for papers (CFP) for potential panelists is open until September 30. You can learn more about the CFP, including contact info and submission guidelines, here on the UPENN bulletin board (which if you didn’t know is pretty much where everyone in the profession goes to look for CFPs since the UPENN board collates CFPs from around the country and world.) You can learn more about the 2019 NEMLA convention here. Any Mercy grad students working in this area of inquiry (or interested in working in this area of inquiry) and who can be in Washington DC in March 2019 to attend the convention should put together a paper proposal and submit it before the deadline. Any questions about the panel should be directed to Mary Reading at: m.a.reading@iup.edu. 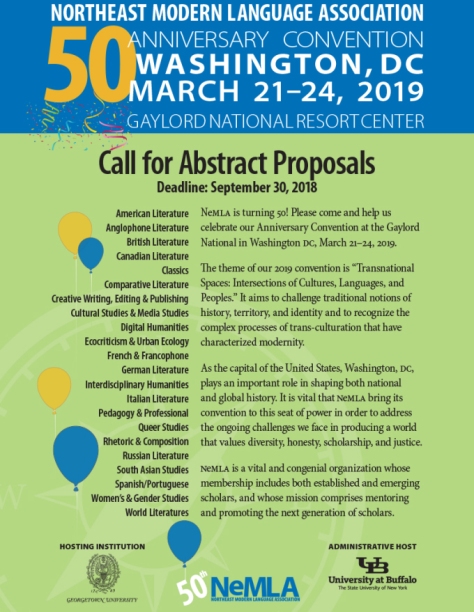 This is the director's blog for the Mercy College MA in English Literature Program. This is not the official College site. The purpose of this is to share news and other information to help MA graduate students stay current with the state of the program and navigate the MA degree. Students in the program should check here regularly to learn about upcoming registration periods, course schedules, and other news.