Dr. Donald Morales is Professor Emeritus at Mercy College, where as a full professor he has taught courses in Caribbean, African, and African American literature. He was awarded the 2009 “Mercy College Online Teacher of the year” (awarded annually to one professor out of the hundreds who teach online at the college; the MA program has three such award-winners actively teaching in it). This month sees the publication of his latest work, “American ‘Migritude’: The Flight of Black British Artists to the United States,” which appears as a chapter in a book to be released in just a few days: Continental Shifts, Shifts in Perception: Black Cultures and Identities in Europe.

Dr. Morales is widely published and highly-regard in his field. Some of his other many publications include: “Do Black Theater Institutions Translate into Great Drama?” in African American Review (31:4, 1997). “Post-Apartheid Theater,” in African Visions (2000). “The Pervasive Force of Music in African, Caribbean and African American Drama,” in Research in African Literature. (34:2, 2003). “Garcia Marquez in Film: His Image of Women,” in Hispanic Connection: Spanish and Spanish-American Literature in the Arts of the World (2004). “Current South African Theater: New Dilemmas” in African Diasporas: Ancestors, Migrations and Boundaries (2008). “August Wilson & Derek Walcott, a Conversation Moderated by Paul Carter Harrison,” in Black Renaissance Noire (9:2/3, 2009/2010). And “Contemporary African-American Drama: Trends in Diaspora Performance,” in Diaspora Representation and the Interweaving of Cultures (2013). Dr. Morales is currently a member of the New York Jazz Workshop and plays soprano saxophone.

Dr. Christopher Loots is currently the head of the MA program in which he teaches American literature, modernism, and modern expatriate literature. His article “‘That Inscrutable Thing’: Holography, Nonlocality, and Identity in American Romanticism” has just been published in the latest edition of Configurations: A Journal of Literature, Science and Technology (24:1, 2016). 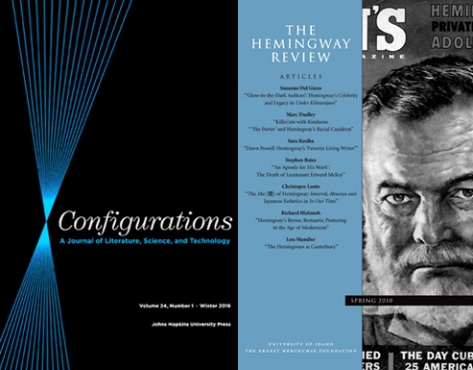 Other publications include “The MA of Hemingway: Interval, Absence, and Japanese Esthetics in In Our Time,” in The Hemingway Review (29:2, 2010), and “Wrinkles in Time: Tracing Joseph’s Trauma in Saul Bellow’s Dangling Man,” in Saul Bellow Journal (22:1, 2006). Research interests include interdisciplinary studies of American literature and science, and intercultural studies of American literature and Japanese religio-aesthetics. Currently he is completing a chapter for a collaborative book-project on Hemingway and Japanese aesthetics, to be published later in 2016, and is working on a study concerning entropy and negentropy in Cormac McCarthy’s fiction. Like Dr. Morales, Dr. Loots is also a winner of the “Mercy College Online Teacher of the Year Award.”

This is the director's blog for the Mercy College MA in English Literature Program. This is not the official College site. The purpose of this is to share news and other information to help MA graduate students stay current with the state of the program and navigate the MA degree. Students in the program should check here regularly to learn about upcoming registration periods, course schedules, and other news.